Symptoms
When the application uses several dynalibs which are included at several levels
(so dynalibs include each other and use several different entry points) these symptoms could emerge :

But there is a bug how TD treats including Dynalibs at runtime.
Seems Dynalib1.apd is not the same as DYNALIB1.apd (mind the case difference).
At runtime, TD loads the dynalib multiple times when the dynalib is included at several levels with
different case in the filename. A dynalib should be loaded only once in the system !
TD thinks the dynalibs are not the same. This results in multiple runtime instances of the same dynalib. 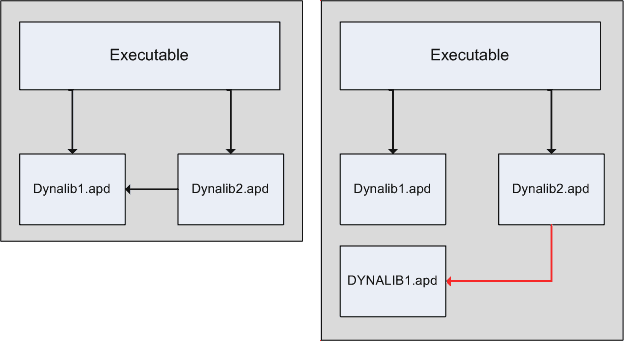 So it is not the case of the filename itself (the physical filename on disc), but the way the dynalib name is spelled in the include section of your sources.

Symptoms
Calling SalCompileAndEvaluate in a dynalib seems to get very slow depending of the dynalib build.
The performance could be a few percentages slower or in worse cases could take minutes for one call.
During execution the CPU of the PC is getting to 100% which locks the PC and a hard reset could be the
only way to stop the application.

Remedy/workaround
A simple workaround is to force the application to freshen up the symbol table of the main executable
which will totally solve the performance issues.
To do this, the main executable should call a SalCompileAndEvaluate at startup. It does not matter
which actions are performed in the call. When the main application executes the command, all injected
dynalibs which uses SalCompileAndEvaluate will work in full speed.

Here a sample of a dummy call

It is wise to check your sources for the issues described in this section to be sure you won't get strange behaviour.
Correcting them accordingly will result in a more stable system.

Since I began using dynalibs I discovered these issues along the way, but it is a hard task
to check for them when the application gets bigger.
But it is needed, because when the workarounds are applied, a system utilising dynalibs is highly stable.

On one application which uses more than 70 dynalibs, I decided to create a CDK tool to automate checking the sources.
It is used regularly and finds the issues quickly and gives a more precise way to pinpoint the faulty locations.

So here I post the tool, named Dynalib Checker, for public use.
It is an application using CDK. The source is included.

A readme textfile is included in the archive with more info.

Source is saved in TD3.1 textformat. If anyone could port the source back to TD1.x and TD2.x, please send it to me so I can put it on the sample vault).