Background Text objects in TD are static controls. They are used to display text in the GUI which do not have keyboard focus
and do not offer any mouse input like clicking. These objects are mostly placed next to datafields as label text.

By implementing some minor tricks we are able to make those objects responsive so that they will react on clicks.
In fact we can create hover effects (when moving the mouse over texts) or even move them by dragging the text.

First you will have to know that background texts in TD are created in two ways :


When setting bStaticsAsWindows system variable to TRUE (before a form is created), TD will create background text objects as WinApi static controls.

When TD paints text on the canvas (so no static control) there is no easy way to implement notifications like clicks.
The objects really need to be static controls, so for TD versions up to 6.1, the system variable must be set.
For TD 6.2 this is not needed anymore.


Even as static controls, it is not possible to be notified of any mouse actions on background texts. The controls do not process any WM messages we could
use to be informed a text has been clicked.
We have to set a specific style to the control so that the most WM messages are processed by the object: SS_NOTIFY


Now the first issue we have to overcome in TD.
Basically, to set a style to an object we should use:


To get the window handle of the object we could do this:


Now we have the window handle, we do this:

By setting the SS_NOTIFY style, the object processes WM messages like other objects. So WM_MOUSEMOVE, WM_LBUTTONUP etc etc.


Now the most difficult issue: how can we trap the WM messages on the text object to be able to react on it?

As we all know, background text objects do not have a message actions section. So even when an object processes messages, we are unable to code the message actions at the object level. See image below


Subclassing is made available by the subclasser library (created by Christian Schubert). It is very easy to use this custom feature and will enable us to process messages on objects which in fact are not supported by TD to process messages. 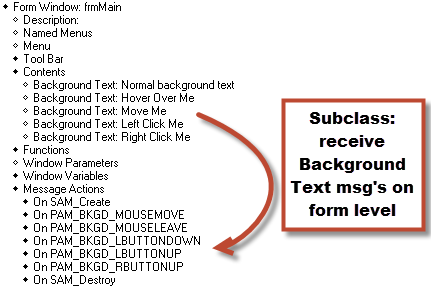 We can subclass multiple messages from the same object. We just have to call the RegSubclass function for each needed messages to relay.
For instance WM_MOUSEMOVE, WM_RBUTTONUP etc etc.

Nice, but not yet completely finished.

The last issue is: now we receive PAM messages (which are in fact the relayed WM messages from the text object), how do we know WHICH object has relayed the message. Normally we have the message actions section underneath the object itself, but now the form receives the messages and the message
itself does not give us any clue which object the message belongs to. In short, which text object has been clicked on?


This is how to do that:

The first line gets the X and Y screen coordinate where the mouse cursor is pointing.
The second line calls a WinApi function to give us the window handle of the object which contains this coordinate.
And this will be the text object we clicked on.


To be sure the object is in fact a background text object, we could check this by

Now we have everything in place to code our stuff for background texts.


The sample shows how to implement above solution. The background text objects have these features:

As explained, there are some differences between older and newer TD versions (having to set the system variable, accessing the background text objects by template name etc).
You will find 3 sources: